Temple, Texas  – As World Breastfeeding week is celebrated from August 1 to August 7, Scott & White Medical Center – Temple (SWMC – Temple) today sees its new milk depot, serviced by the Mothers' Milk Bank at Austin (MMBA), thrive and support families in need.  Since opening May 24, the depot has received more than 2,600 ounces of donated milk.

One of the largest suppliers of human donor milk to hospitals across Texas and in 22 states, the MMBA fills prescriptions written by physicians for the most fragile babies who need the life-giving and sustaining nutrition of donor human milk to thrive.

The McLane Children's NICU at Scott & White Medical Center – Temple ranks among the top in survival of fragile newborns.

Women who are currently breastfeeding infants under 1-year-old are eligible to be screened at no charge to become human milk donors.

Although any woman can donate her breastmilk regardless of where she lives, the new milk depot at SWMC – Temple will make it easier for those in the Temple area to donate this scarce resource that has life-saving impact.

"Our reputation for providing safe, nutritionally analyzed, and labeled donor human milk to hospitals and outpatients has led to tremendous growth in demand—a challenge and also a success," said Kim Updegrove, Executive Director of the Mothers' Milk Bank at Austin. "By partnering with Scott & White Medical Center – Temple, we will raise our awareness with a vital audience – breastfeeding women who are uniquely qualified to help save the lives of premature and critically ill babies."

Non-profit milk banks like MMBA ensure human donor milk is safe and available to the infants who need it most. The pasteurized breast milk dispensed is specifically processed to meet the specific needs of fragile and sick babies.

Founded in 1999 by two Austin neonatologists, Drs. Sonny Rivera and George Sharpe, the MMBA serves babies with the greatest medical needs, regardless of family's ability to pay.

Breastfeeding and lactating women in the Temple area who are interested in donating their breastmilk for the benefit of premature, ill and medically fragile infants may call toll-free 1-877-813-6455 to begin the screening process.

About the Mothers' Milk Bank at Austin

The Mothers' Milk Bank at Austin is a non-profit organization whose mission is to accept, pasteurize and dispense donor human milk by physician prescription, primarily to premature and ill infants. Women who are lactating can donate milk to The Mothers' Milk Bank at Austin regardless of where they live. In 2015, the milk bank received donations from 884 women and pasteurized and dispensed 483,000 ounces of donor human milk. Prospective donors across the U.S. may call toll-free 1-877-813-6455. Learn more at www.milkbank.com. 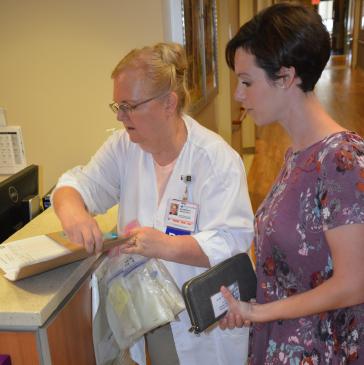